After getting a late start as usual we drove to the Hertz dealership in Fair Lawn, NJ. By shady, I mean that this particular dealership happens to be sandwiched between an Exxon and a Dunkin Donuts. After making the reservation at this location Kat and I drove by this "certified" rental agency a few times and noticed that they had about three cars outside that appeared to be rentals and all of them were slightly more used than I would like. We began to get a feeling that there may be a problem this morning trying to take one of their three cars to California. Some of you may be thinking, if you had any doubts why would you book with them, well my name is Arp and they were $600 dollars cheaper than all the other dealers in the area.

Either way we rolled the dice and put our faith in the Shady Hertz in Fair Lawn, NJ and did they ever deliver. Not only was the price right but they rented us a PIMPTASTIC Ford Explorer, complete with leather seats, a navigation system, satellite radio, and all the storage we could possibly need for our trip. Due to the fact that we had faith in the seedy rental place and her straight up pimptitude we decided to name her Faith, after Faith Evans.

After picking up Faith and packing her with our suitcases we took off on our adventure. We flew through New Jersey without a hitch and entered Pennsylvania bright eyed and bushy tailed. The air was cleaner and I think I may have been breathing actual oxygen and we were all feeling great. As we left Jersey behind us in the rear view mirror we began the ominous task of crossing Pennsyltucky.

Now I am used to driving left, right, up, and down around Jersey but we ain't got nothing on Pennsylvania. Not only does Pennsylvania believe that Route 80 should be a  two lane highway, it five lanes in the civilized county of Bergen, but they also decided to take one of those lanes away every 30 or 40 miles or so.

I drove Faith from 10:24 A.M. to 3:24 P.M. but I still could not conquer the very long state of Pennsylvania. I ended up admitting defeat after the slow lane, the only lane, became a parking lot. I pulled off route 80 and drove off the exit to the first parking lot I could find. Much to my surprise the place we pulled into was called SHEETZ. I am not lying about, this and I have a picture to prove it.

Upon departing from Sheetz with a Tasty Cake, Butterscotch Krimpet coffee in my hand and Benni behind the wheel we embarked on the second leg of the trip; destination Cleveland, Ohio.

The rest of the trip through Pennsylvania was pretty much more of the same, 75 MPH for 30 miles and then construction. Over and Over again. But then in the distance we saw a wonderful sight. Could it be, was it a mirage, an illusion, a case of Road Tripping, no it was real.....  Welcome to OHIO.... 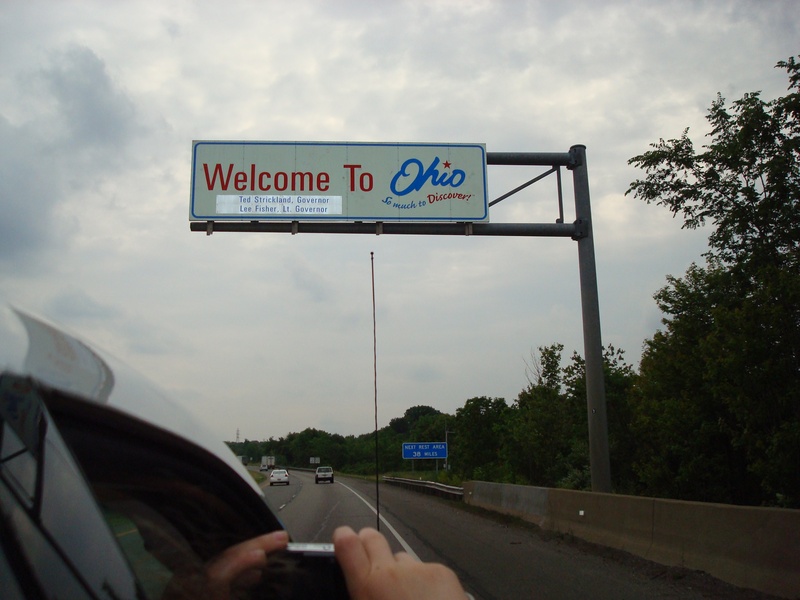 After a few more hours of driving we arrived at our destination. The Rock and Roll Hall of fame. Unfortunately we were not allowed to take pictures in the museum but we did get a picture of the outside and the world?s largest rubber stamp. The museum itself was extremely cool. There were a lot of artifacts from the heroes or Rock and Roll. Jim Morrison's Cub Scout uniform, Jimi Hendrix's clothing, a slue of guitars, the insane outfits of P-Funk, and a ton of others. When we arrived we were also really surprised that there was a Pink Floyd Exhibit which was amazing. A replica of The Wall complete with stage props. The entire 5th and 6th floor was pretty useless to us unfortunately because it was all about Bruce. I mean seriously I was out of Jersey for all of 7 hours and there was Asbury Park in Ohio starring back at me. LAME!

After leaving the Hall of Fame we realized that we did not have any booze for the evening. So we used our trusty GPS and found some stores that could help us with this issue. We found a few and the good news is that we found some beer; the bad news is that we also found that Cleveland has a Ghetto. Now, Now, Now I know what you are saying come on it's Ohio how bad can it be. Oh no, that is what I thought. I have been to some ghettos in my day and the Cleveland Ghetto rivals all of them. There was a stretch of 2 or 3 blocks where none of the buildings had windows, there were churches that were closed, there were churches that sold chicken, there were cars with broken windows, and cops every where. It was insane.

Luckily we found our way out of this mess and to our salvation A Ruby Tuesday. With food in our bellies and sleep on our minds we made it to the Best Western and to this BLOG. Good night all and check back tomorrow for more information and Pictures.

Oops, you forgot something.

The words you entered did not match the given text. Please try again.

Reply Ginny
11:51 AM on June 13, 2009
Ah, the ghetto of Cleveland. Come cemeterying with us sometime, and you will see some beauties! Baltimore and Philly has Cleveland beat I think.

Start a Free Blog at Webs.com