For all of you who were reading this blog throughout the trip I want to extend a heart felt thank you from Kat and I. It was a great feeling while we were so far from home to read your comments and see how many people actually care about us to read about our adventure. Sorry for the delay in this post but Vegas likes to charge for everything and our hotel did not have free wireless internet so I did not post. The following post covers day 8 and day 9 and this will be the final post of the trip. You can check back in a few days for a summation of this wonderful vacation and new pictures but the next 3 days will be full of R&R in California.

Another day of the road trip and get this, another day on the road. The first 7 hours of our 8th day was spent driving through most of Utah, a sliver of Arizona, and finally Nevada. We arrived in Las Vegas and drove to the main strip where our hotel, Planet Hollywood is located. We stayed in the Hollywood Hip room and got a free bottle of wine with the room. I guess the recession and the fact that it is 90 degrees here makes Vegas an unpopular vacation spot in June because we got a tremendous deal on the hotel room.

The hotel was awesome and had actual movie memorabilia from the movie Mash on display. Even though we were crazy tired we decided that when in Vegas you must stay up and experience some of the Vegas nightlife. We took our free bottle of wine to the room and realized we did not have a bottle opener to access it. I went downstairs and asked three different people to open the bottle and I was told that I would have to buy a corkscrew from the gift shop by all of them. Being the resourceful people that we are, we took turns jamming the cork into the bottle with a pen until we got it to finally give way to the nectar of the wonderful grapes that were squished to make this wine for us. After drinking some wine we decided that we were hungry and left the hotel room to find dinner.

We found a small Mexican restaurant in the mall below our hotel and went in to feed our hungry tummies. We all ordered another drink and some food. I ordered the Champion Burrito, Kat ordered the grande burrito, and Benni ordered a fajita. I knew the burrito would be somewhat large being called the champion and all, but it was humongous. It was 35 ounces of Pork, cheese, rice, and beans and it defeated me fairly easily. After the food we determined that it was time to take in some tourist sights in Vegas. 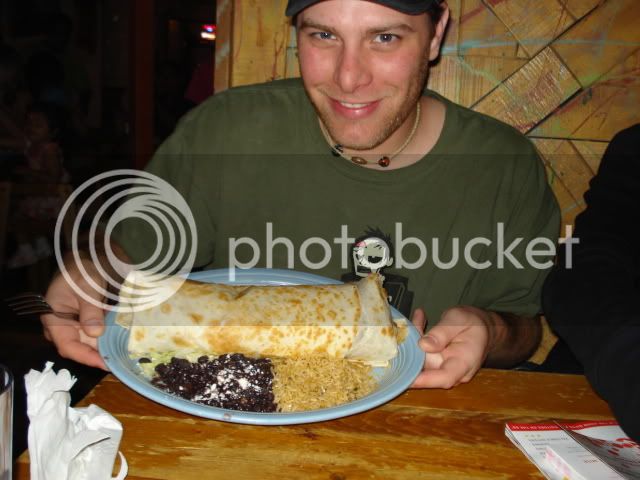 While walking around the strip we took in the fountains at the Bellagio, the Siren show at Treasure Island, and walked through a few other casinos as well. Being that we had been to Vegas in the recent past we were not all to sad that we could not stay up to late and called it a pretty night. Before retiring to our room Kat won $50, Benni won $20, and I won $1.63. Hey, I know it is not a lot of money but anytime you leave Vegas with more you came in with you won a lot.

We woke up a little later than we wanted to just because we were so very tired from our travels and checked out of the room. On the last day of driving we were going to do to reach our destination we had no real stops in mind but California. We began to drive out of Vegas and drove approximately 50 miles before we saw what appeared to be a factory in the middle of the desert. This building was at exit 1, 1 mile from the California Border. As we got closer we realized that it was not a factory at all but a casino. Not only was it a Casino but it had a really cool roller coaster in the back yard. We all agreed that since the amusement park got rained out we had to ride this strange desert coaster. We pulled off the highway and hit up the coaster which went through the casino itself. The coaster was called the desperado and was amazing. It rivaled most of the coasters that I have experienced at actual amusement parks and was an extremely un anticipated stop on the final day of our journey.

After hitting up the coaster we made our way to the Hertz Rental Car Return area while battling the horrible traffic that is Los Angles Driving and retuned our mobile home for the last 9 days. It was a sad moment of the trip as Faith was a big part of the journey but it had to be done. We rented a new car which is a Hyundai Accent and is named No More. Get it…. Faith No More. HA. I love puns.

Again Thank you all for following us on this trip and we are looking forward to returning home and chilling with all of you.

Oops, you forgot something.

The words you entered did not match the given text. Please try again.

What I really want to see is all the stuff you guys are bringing back...Ooh! Can I get a shirt that says "My Friends Went to California and all I got was this T-Shirt"?? That would be awesome...HAHA!! Enjoy the rest of your trip guys!!

Reply Kevin F
8:18 AM on June 19, 2009
Great blog. Followed you guys along the way. I would have liked to hear a story of Kat driving up Pikes, but hey maybe some day.

Have a safe trip home, and we will see you soon.

Reply Colleen Uuereb
1:39 PM on June 19, 2009
I laughed imagining you taking turns stabbing that cork. We are probably going to stay at Planet Hollywood in October, so good to know to possibly bring a corkscrew!

Start a Free Blog at Webs.com